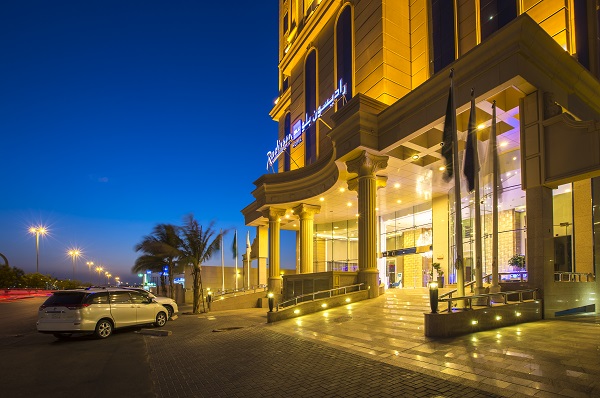 AbdulMohsen AlHokair Group for Tourism and Developmentopened Jeddah’s Radisson Blu Plaza Hotel on the 8th of December, 2015. This official opening is considered the seventh of its kindin the city of Jeddah and the thirty-third in the Kingdom of Saudi Arabia. It came as a result of the partnership agreement signed between AlHokair Group and The Rezidor, one of the world’s largest hotel groups and the brand owner of Radisson Blu and Park Inn.

Sami Al-Hokair, Deputy Chief Executive Officer of AlHokair Group,explained that this outstanding partnership portrays the group’s keenness on providing international-level services to their customers as well as advancing the tourism industry in the Kingdom, through the launch of several high-end hotels.

Jeddah’s Radisson Blu Plaza Hotel is the ideal destination for leisure and work, due to its proximity to most of Jeddah’s vital centers.

The hotel features 112 spacious rooms and suites filled with natural light. It also includes lobbies and separate bedrooms, which makes it a perfect housing option in Jeddah. Apart from their 24/7 room service the Radisson Blu also offers an on-site restaurant called Al Liwan Restaurant where you can enjoy international and local cuisine all day, and a lounge that provides an excellent selection of hot and cold drinks.

As for leisure facilities, the hotel is equipped with an outdoor pool and a fitness center.The hotel is located on King Abdullah in AlNaseem district. It is also located near the highway, which is 20 km away from King Abdul Aziz Airport.