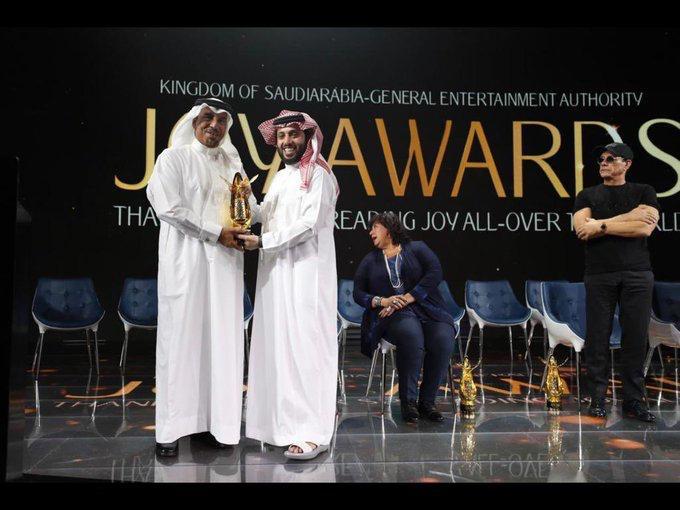 His Excellency the Chairman of the General Authority for Entertainment, Turki Al Al-Sheikh, has launched Joy Entertainment Industry Forum on Sunday, October the 13th, at The Ritz-Carlton hotel in Riyadh.

This event has brought together many entertainment pioneers from around the globe in one place in an exhibition that involved some of the world’s leading international entertainment companies. Al Hokair Group’s participation in the exhibition came with one of the most important entertainment centers in the Kingdom; Sparky’s Amusement Parks, which include up to 57 entertainment facilities.

A dinner party was held during the forum, involving a large group of speakers and entertainment pioneers –both local and international- and during which His Excellency the Chairman of General Authority for Entertainment has honored Al-Sheikh Abdul Mohsen Al Hokair, Chairman of Al Hokair Group, for his crucial and prominent role in reviving tourism in the Kingdom of Saudi Arabia and the Gulf region for many decades, in addition to the Group’s contribution to creating and developing the concept of safe entertainment and leisure via their entertainment centers inside and outside the Kingdom.

And from his end, Al-Sheikh Abdul Mohsen Al Hokair expressed his happiness and gratitude for the General Authority for Entertainment’s efforts saying: “This is a night of a lifetime, and the fruit of 50 years of hard work that brings pride to our country. We once used to travel abroad every year for tourism, and here we are returning back to our own country thanks to the great efforts of the Custodian of the Two Holy Mosques and the Crown Prince.”

Al Hokair continued saying: “The objectives of our country’s ambitious vision for 2030 all lead to the promising development of the entertainment sector in the Kingdom while broadening newer horizons for investment and creating sustainable and long-lasting investment opportunities that will help build a more vital community that’s full of life with all the diverse entertainment options available.”