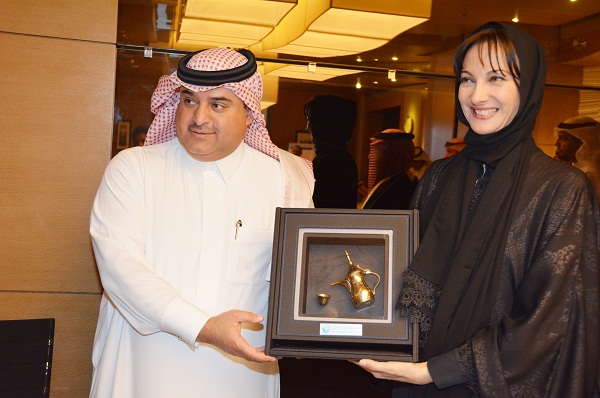 AlHokair Group Welcomes Greek AlternateTourism MinisterElena Kountoura: Tourism in the Kingdom is Good and We Call for an Investment in Greece

The Alternate Greek Tourism Minister,Her ExcellencyElena Kountourasaid that "the tourism potential in the Kingdom are good through investment and attraction, as well as the luxurious choices for both families and indivisuals. Saudi arabia has a variety of religious, historical and cultural destinations.” She then invited investors and businessmen to investin the Greek tourist market.

This came after the Minister’s meeting with the Greek Charge d'Affaires to the Kingdom of Saudi Arabia, His Excellency Elias Andronicus Sklovatos, in addition to a number of senior officials of Saudi Commission for Tourism and Antiquities (SCTA), which foreshadowed the 1st Greek Tourism Workshop . As part of the workshop, the Minister met with members of the Tourism Committee of the Chamber of Commerce to discuss tourism in the both countries, and the possibility of investing in Greece.

The meeting discussed several topics, including facilitating the procedures for obtaining tourist visas to Greece, and tourism opportunities at hand.

Her Excellency, Elena Kountourawaswas pleased with her visit to the Kingdom. She even noted her admiration for the Hilton Inn Double Tree Hotel in Riyadh, which the latest of AlHokair Group’s hotels .

Majid AlHokairthen thanked the Alternate Tourism Minister for taking time off from her busy schedule to come and visit the Kingdom, pointing out that the themes that have been reviewed in the meeting would sure improve the services and the advancement found in the tourism sector in Saudi Arabia.