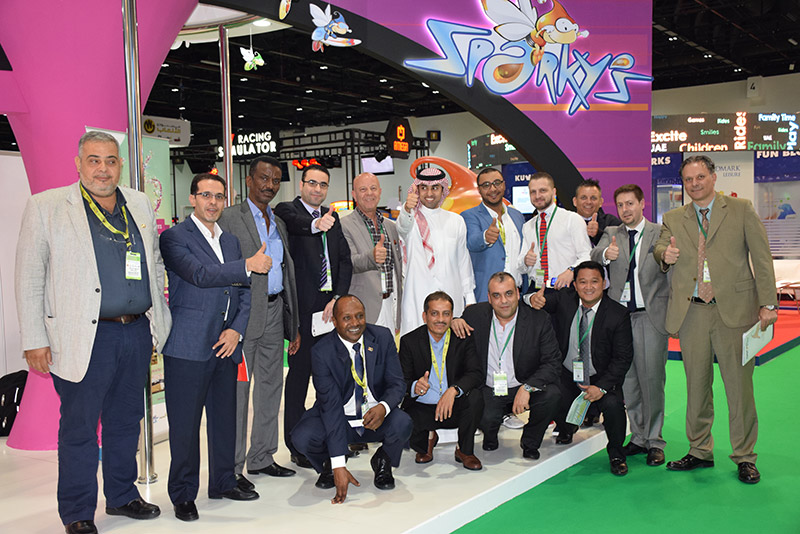 AlHokair Group for Tourism and Development participated as one of the leading companies in the field of family entertainment centers in Dubai’s Deal 2016  Entertainment, Amusement and Leisure Show, which kicked off at Dubai World Trade Centre from April 19 to April 21, 2016.

AlHokair Group was represented in the exhibition by Sparky’s Recreational Centers which was characterized by a unique design and style that reflected its recreational centers. In addition to Sparky’s Snowy Forest, the group also presented its first trampoline park in Saudi Arabia , Sky Zone.  The park covers 1400 meters and 2500 meters of space. It was launched under the supervision of trampoline experts as a way of integrating sports and entertainment. AlHokair also displayed some advertising publications about its game manufacturing factory and its entertainment sector.

Mish’al AlHokair,  the Executive Vice President and General Manager of AlHokair’s Entertainment Sector, expressed AlHokair Group’s keenness on being present at such an exhibition, where they will get to exchange experiences and visions with other in the same field, as well as exploring new opportunities in the entertainment sector. All of this of course is done to provide excellent services to our clients in order to satisfy their tastes and meet their aspirations.

He also added that AlHokair Group strives to have a positive outcome in the entertainment sector, which is aiming  towards "a new era of entertainment.” An era where we will have large commercial centers with high-tech recreational centers, which will host a variety of games, cinemas and food courts. This is due to the increasing demand on action games, interactive games, high-tech 7D video games and others.

This exhibition was a great unique opportunity to learn about the entertainment cities in the UAE and in other participating countries. This event is the largest event for family entertainment centers to be held on a global level.