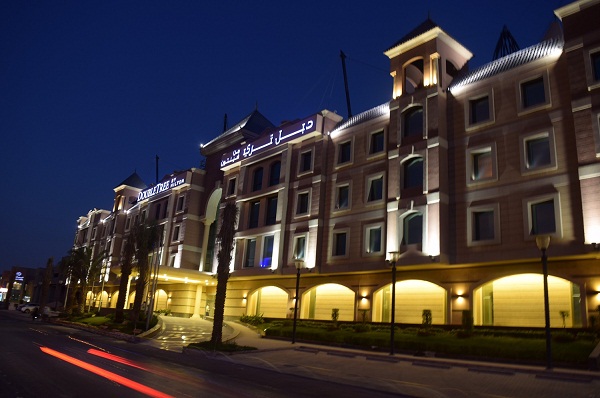 Abdul Mohsen Al-Hokair Tourism and Development group launches its latest hotel in the Kingdom "Double Tree Hilton-Riyadh", the twelfth hotel in Al Hokair group in the central region.
The group aims in the expansion in the development of tourist enterprises to double the number of beds in the hotel facilities, and provide job opportunities for youth of both sexes and to support the tourist operation in the Kingdom.
The global importance of Hilton presence in the Middle East and Africa highlights: the economic viability of the area where Hilton has now become the largest hotel development program in the region. This openness brings more awareness for the brand in the Middle East, where now it has four diverse hotel brands opened in Saudi Arabia ranging from elite luxury hotels to full service hotels.
Sami Al Hokair, the Managing Director and CEO of Al Hokair group explained; ‘The group has a close relationship with Hilton where Al Hokair has signed a major agreement with Hilton Worldwide in 2008 and that there are other partnerships between the two parties in the coming period, due to the good reputation of the company and its global reputation and its interest in the Arab market, especially the Kingdom.
This presence will contribute in raising the international standards of hospitality services in the region and that this distinct relationship reflects the keenness of the Group to provide global services to its customers and the development of the tourism industry in the Kingdom, through the launch of several high-end hotels.
Double Tree Riyadh Hotel, features (171) room, four of which are equipped for people with special needs, in addition to (48) suites. The hotel rooms are sleek and trendy and provide the latest amenities from the mini-bar and flat TVs screens as well as free wireless Internet service. The hotel also features six meeting halls which makes it the best hotel choice for businessmen, in addition to an area for rest and relaxation and fully equipped fitness centers.  A restaurant of Western and Middle Eastern cuisine and coffee/tea lounge is all available as well at the hotel
The Double Tree Hilton Hotel of Riyadh - Gateway commercial lawns-, also features a stunning location and proximity to key areas in the heart of the capital, next to the King Abdullah Financial District and it offers easy access to many places of business, educational institutions, shopping malls and tourist attractions in Riyadh. In fact, the hotel is just 20 minutes from the center of the city / old Riyadh and the diplomatic quarter and 15 minutes from King Khalid International Airport.